The History of and genres of Music

The History of and Genres of Music

This webiste is for people to learn more about music. People should learn about many different genres other than the ones they just hear in every day life.

Music is so diverse and interesting it is almost imposable to make one website about all of it.

Because of that above this is mainly about the music genres I listen to plus some others that are related to what I listen to.

Here is a list of popluler genres of music and a sort descritpiton of each.

Rock: a form of popular music that is harsher than it's predecessors(blues).

Metal: A desendent of rock but is even harsher.

Genres
Music Genre timeline.
Music genres with a artical about them.

The basis of most popular is Blues which originated in Memphis, Tennesse after the Civl War ended in 1865. It was started by Afircan Amercans after being freed from slavery and is tipicly in a minor key. Blues has many desendents like Rock, R&B, and Soul.

Athough Rock and Blues are realated Rock is large enough to have gone and done its own thing. Early Rock was very conected to Blues but that it got less and less pronounced over time. Rock was populare in the 80s with bands like AC/DC, ArrowSmith, Guns N Roses, 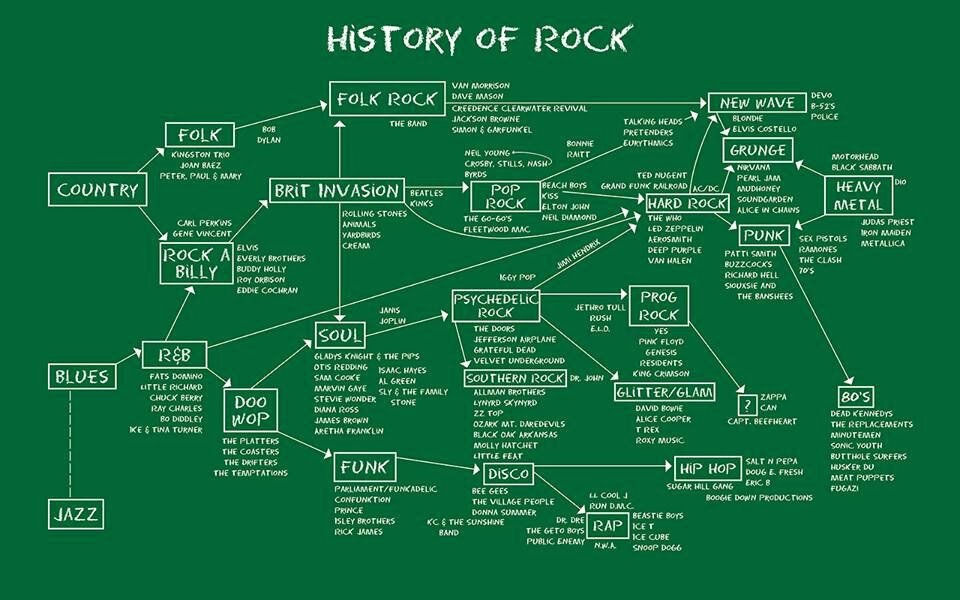 Metal is like Rock but even more intnse. It is mostly agreed apon that the band that started it was Black Sabbath with their song "Black Sabbath" in the album Black Sabbath. The genre was much more popular in the late 70s all the way unill the mid 90s.

Jazz is a interest form of music. Jazz is is I think related to Blues and Ragtime, there is confilcting infromation. It sarted in New Orleans by African Americans. Jazz is characterized by swing and blue notes, complex chords, call and response vocals, polyrhythms and improvisation.

The real tallent is not playing the music but is coming up with it.